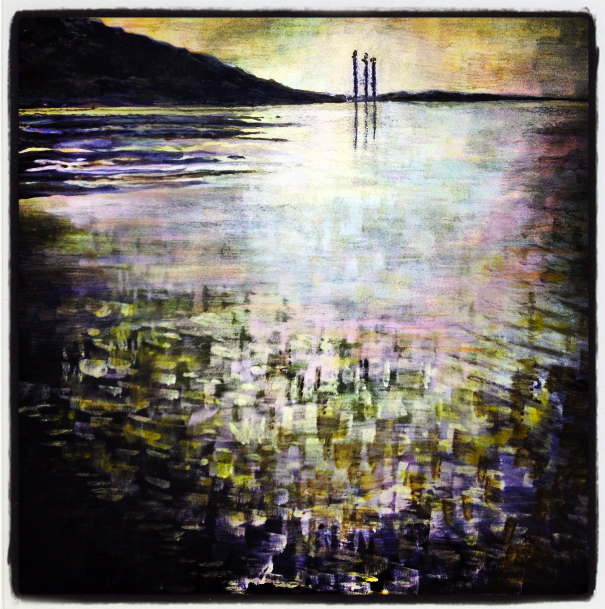 My brother came back to the City one Midsummer's Eve, with traces of salt on his clothes and in his hair.

He settled in slowly, but never quite managed to close the gap filled with bird-cries and wave-roar between him and the rest of the world. I loved the man who came back as I had the man who left, and the story that clung to him. The man who came back let slip his story in fragments over the years...hesitatingly, like his own story was revealed to him in the telling.

He worked and studied hard, and eventually became a doctor in the City. He married, had a daughter. He was busy, and surrounded by people most of his waking hours. But that space, that stretch of pebble-beach and sand between him and others, remained. He could no longer remember a time when it wasn't there.

Despite this, or perhaps because of it, he became known for his sublime bedside manner. But his patients didn't know that for him they were systems of ebb and flow; breaths, heartbeats and metabolic pathways. Held together for a while at the point where two waves meet.

They didn't know that he watched them in tender detachment as a layer of spume sinking into the sand.

At home he tried to close the gap. Some nights he put his ear to his wife's back, but underneath the warm skin against his cheek, behind the calm percussion of her heartbeats, was always the moon-pull of the tides. In the evening when he read to his daughter he put his chin against her hair, but underneath the comforting after-bath-before-bed scent was always the smell of salt. When his wife became ill he sat by her side and saw her disappear, until she was left thin and dry, like a layer of salt on stone. He felt sadness then, and was glad he did. Proof that he had loved her, in his own way.

A year later he came to tell me the last part of his story. After a few words he stopped talking. He'd come to that space in the narrative words can't cross. When I met his eyes, I felt as if I was sinking into a vast vault of sky reflected in an unknown ocean.

One morning soon after, he locked the door to his house and put the key under the mat. He took a train to the coast and disappeared somewhere along a lonely stretch of beach.

He will probably return eventually, to some other City at some other time. Forever trying to escape the embrace of the sea.